Posted at 16:00h in Biography by Gabriela.Islas 0 Comments
0 Likes 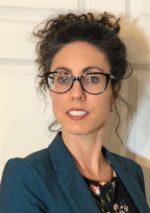 Stephanie comes to Strategic Health care with over ten years of professional experience in the health insurance and billing industry. In 2008, she began as an Account Specialist for a physical therapy billing and collection group. She worked with the insurance plans on billing denials and educating the nearly 90 clinics on effective ways to reduce these errors.

After moving to Columbus she began a career with a local hospital credentialing for several departments including their PHO composed of over 1,900 providers. Stephanie most recently worked as a Credentialing Manager for a multi-state Urgent Care Group credentialing for their facilities and enrolling providers in the government plans.

Stephanie graduated in 2013 from Columbia Southern University with a Bachelor’s of Science in Health Care Administration.